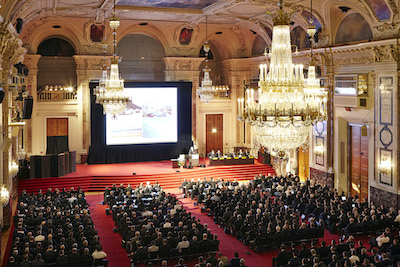 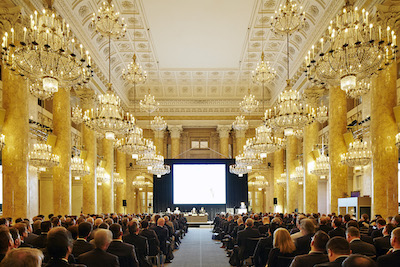 takes place annually and is one of the worldwide leading events of this kind.
At the International Vienna Motor Symposium, more than 1,000 decision-makers from the most important enterprises of the worldwide automotive engineering industry meet together. The three-day programme offers a variety of ground-breaking lectures and allows sufficient time for exchange of opinions and networking.
This top-level lecture programme is accompanied by an exhibition at which leading automotive and component companies present latest technologies and developments.

The 44th International Vienna Motor Symposium is planned as a 3-day face-to-face event from 26-28 April 2023.

Please kindly send your proposals as soon as possible – by 30 September 2022 at the latest.

In this spirit, Markus Schäfer, Member of the Board of Management of Mercedes-Benz Group AG, described the Vision EQXX "as a symbol of transformation" in his lecture at the Motor Symposium. This innovative electric vehicle is able to cover more than 1,000 km on public roads with one single battery charge. With this range and an energy consumption of less than 9 kilowatt hours per 100 kilometres, it is the most efficient Mercedes ever. Although it is, however, not yet clear whether the car will actually be produced in its current form, Schäfer stressed that the technology used in the EQXX will definitely be implemented. Overall, Daimler plans to only sell zero-emission passenger cars by 2030 with production also becoming climate-neutral.

"The road towards e-mobility will be a relatively long one", stated Luca de Meo, Chief Executive Officer (CEO) of the Renault Group, a pioneer of e-mobility. In the coming years, the Group plans to invest another 23 billion euros in electromobility, while also implementing further improvements to the internal combustion engine (ICE) and continuing to produce a diesel engine beyond 2030. Renault expects that around 90 per cent of vehicles worldwide will continue to be powered by an ICE in 2030. According to De Meo, this is attributable to three important facts: customer benefit, eco-footprint and affordability.

The Renault Group’s CEO explained that today a large battery (90 kWh) would be required for an e-family car to cover 85 per cent of current customer needs. Furthermore, due to the prevalent electricity mix in many regions, including in Germany, the eco-footprint of an e-vehicle is currently higher than that of an economical hybrid vehicle. De Meo went on to stress that last but not least, e-vehicles need to be affordable to be bought. As a result of rising commodity prices, however, they are becoming even more expensive. For this reason, consumers will tend to keep their current cars for a longer period. Therefore, he stressed, it was urgently necessary to also find solutions for existing vehicles and fleets to facilitate the transition to CO2-neutrality. De Meo thus called for enhanced cooperation among automotive industry, energy sector, legislators and research institutions. According to the CEO, alternative fuels could make an important contribution to CO2 reduction. In this context, he pointed out that it would be necessary for legislators to move away from only considering CO2 emissions from tank to wheel but instead consider the CO2 footprint over a vehicle’s entire lifespan ("from cradle to grave"), as is done by Renault. De Meo concluded by stating that with a view to managing the costs of transformation, Renault intends to significantly reduce its wide range and variety of models and engines.

The same line was taken by Thomas Ulbrich, Member of the Board of Management of the Volkswagen Brand, who also announced a significant reduction in model variants at the Motor Symposium ...

The 43rd International Vienna Motor Symposium took place  from 27-29 April 2022. The conference documents for this event can be pre-ordered from April 1, 2022, they will be sent from the beginning of May 2022.
All 72 lectures are presented on approx. 1600 pages in 3 volumes including additional booklets, on an included USB stick you can find all content in electronic form.
The USB stick can also be ordered separately.

Comments of the
international media